“ArbuGuard” is a poly-herbal formulation made-up of aqueous extracts of 8 wonder herbs. These herbs are well-known and widely used in India and other territories in food or traditional medicine. “Arbud” is a Sanskrit word which means a tumor, swelling, cyst or cancer.

Dosage – 1-2 capsules twice a day before/ after food.

Various research studies on these ingredients proved that each ingredient has their specific properties and effects on human body. A number of research papers were published in journal which showed positive health benefits of these ingredients. They are immunomodulator, anti-oxidant, anti-bacterial, anti-cancerous, digestive, nutritive and anti-aging in property. After studying Ayurvedic classical texts and reviewing various drug research publications, we formulated “ArbuGuard” and promoting it as an herbal dietary supplement for Cancer patient. We also found that it helps in proper digestion of food and excretion of waste. It is also very useful in reduction of pile mass (anti-haemorrhoidal effect), lipoma, cyst and deep scars of acne vulgaris. Though, there are a lot of research work done on ingredients of “ArbuGuard”, we are highlighting only anti-cancer activities below.

There are no reviews yet. 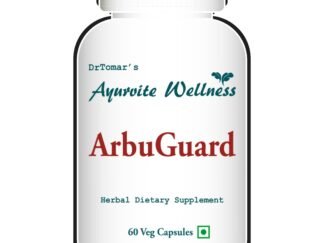